We stayed at Yamunotri River Side Camp  (next to it is Gangnani kund). River Yamuna flows just next to this camp.

River Yamuna is a divine goddess flowing with liquid love. Yamuna River originates from the Yamunotri (Kalind parvat – Saptarishi kund lake) Glacier on the southwestern slopes of Banderpooch peaks. It merges with the Ganges at Triveni Sangam, Allahabad. Beauty around her abounds; this is indeed a river blessed with nature's delights.

Our plan was to cover Haridwar – Barkot – Yamunotri – Uttarakashi – Gangotri – Uttarkashi and then move towards Kedarnath and Panch Badri’s covering Panch Prayag’s. But due to heavy rains and landslides during August, the Yamunotri and Gangotri yatra had come to a grinding halt. The incessant rains had battered Uttarakhand triggering landslides, cloudbursts and flash floods, which had wiped away bridges, homes and roads.

We knew that rains and landslides would change the plans at any time. But this was the case from a month and the Yatra had come to complete halt for the past month. At this point, we felt cheated by travel agents, as they did not inform us that we could not do the Yamunotri and Gangotri Yatra. We went all the way up-to Barkot and came back to Haridwar. We decided not to go through travel agents next time, but just hire the vehicle and plan by ourselves.

These were some lessons learnt during our Yatra. I would advice anyone to do complete planning by oneself or to go with travel groups which are very well known and recommended by known people. Please check the road conditions well ahead of time by yourself and at each place, enquire about the road conditions ahead. Be prepared for last minute changes and have alternate plans. Never book hotels well in advance unless you are travelling in peak time and are sure of no rains happening at that time. No hotel returns cancellation charges. Always carry a map with yourself.

Plan for a very good experienced driver on these mountain regions. The vehicles are not allowed to drive after 7pm (at the max 8pm) on these mountain regions. Have good rest from 8pm till 7am. If you are afraid that the hotel food might cause a tummy upset, try to cook yourself with some electric cooker and carry some rice mixes like puliogare kaachal, pickles or vatha kozhambu.  My mother and me had rice cooked by our selves whereas my husband and dad tried food in hotels.

Give a call in advance to the hotel people to find out whether the hotel is really booked in your name and what facilities they provide. At times these hotels are quite different from what they look and claim on the Internet. Never book for tents (which are closer to nature), if you are going with elders and children. They do not provide any facility as they show on Internet. They may not have electricity; hot water facility as they claim and one is at the risk of insect bites. Always carry a torch, warm clothes, medicines, good bed sheets, cash in hand and some food for at least 2 days.

However, travel to Barkot was a very enchanting experience with the Yamuna River flowing along the path until we reached the destination.

Located in the pristine landscape of Uttaranchal, Dehradun is one of the principal tourist destinations in India. Dehradun serves as the capital of the state of Uttarakhand (formerly known as Uttaranchal). Situated in Doon valley, Dehradun is around 246 km from New Delhi, the national capital. It is bordered by the Himalayan mountain ranges to the north, Sivalik Hills to the south, the Yamuna River to the west, and the Ganges River to the east.

Located around 2 kms from the main road, the  ChandraBadni temple in Dehradun is a place of great spirituality. We then visited Daat Kali Mandir. There is a women poojarini here.

Somewhere between Dehradun and Mussoorie, we entered the hill section. From this point on, the drive to Mussoorie and from there to Barkot was extremely scenic. On the road from Dehradun to Mussoorie we first stopped at Prakasheshwar Mahadev temple. 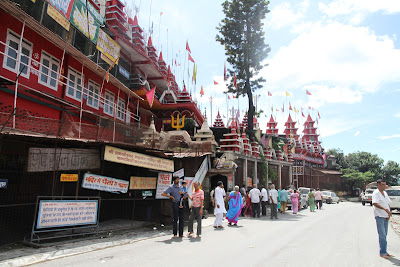 All over the hills, the natural beauty was stunning. Because of the ongoing (and ample) monsoon rains, the hills were full of lush greenery. There were lot of waterfalls and temporary springs as well. Many such springs often crossed the road we were travelling on. 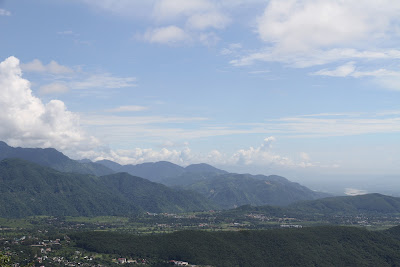 On the way from Mussoorie to Barkot on Mussorrie-Chakrata road, one sees the Kempty falls. One has to take a cablecar / ropeway to go down to the falls. 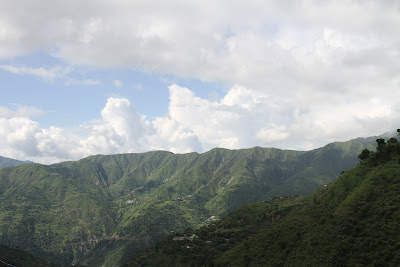 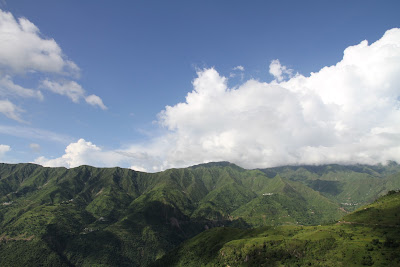 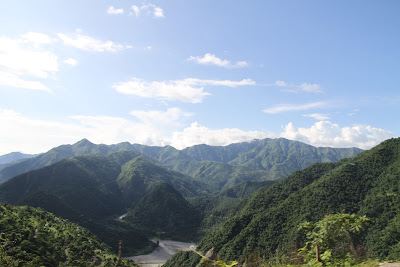 From here we proceeded towards Yamuna bridge, situated on Chakrata-Barkot Road. As we went towards to mountains, the scenery started getting more spectacular.  Every now and then, we came across small landslides that had been cleared to enable traffic to continue moving on the road. 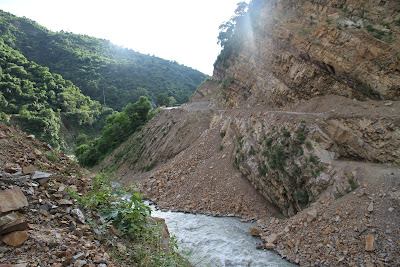 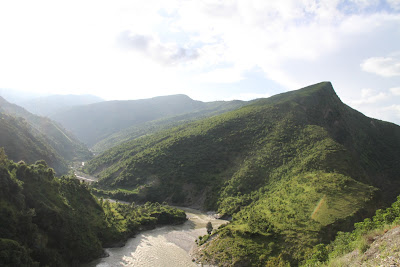 Enroute to Barkot, there is a diversion from the main road to Lakahmandal (5kms in each direction). Lakhamandal - is a large village on the banks of Yamuna, on the Naugaon-Barkot Route known for its temple ruins. It is Archeology of Survey protected site. The ruins at Lakhamandal give an indication that in the past it must have been a major temple town. Meaning of it is there has been one lakh lingams (mandals) at this place. Many believe that Lakhamandal is the same Lakhshagriha described in Mahabharata. Kaurava Prince Duryodhana had built a palace made of lakh (shellac), in which he tried to burn the Pandavas alive. It however appears that the location of Lakshagrah is at Varanavat in modern day Bagpat district in Uttar Pradesh on the northern bank of River Ganga.

There is a lofty tower that enhances the prominence of the  LakhaMandal temple at Uttarakhand. The most beautiful sight is that of the Yamuna River which flows alongside of Lakhamandal.  There is a pracheen Pandava gufa at a distance of 2 kms from the Lakhamandal temple. A cow that used to drain her milk on the Shivling everyday first discovered the Temple. One-day the owner of the cow followed his cow to check & found this temple. 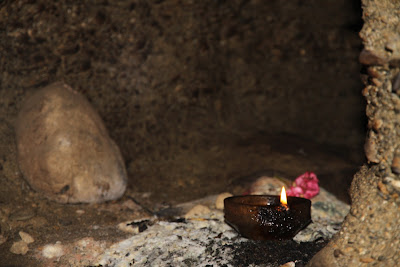 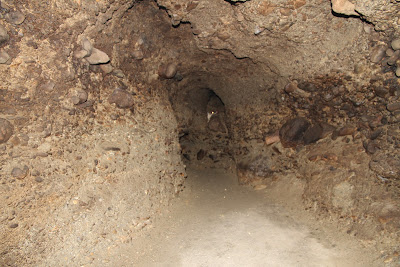 This temple is especially popular amongst the people who belong to the Shakti Cult. They believe that a visit to this temple shrine will bring an end to all their misfortunes and ill destiny. They gladly accept the trouble to come over to this place from far and wide solely in search of peace and eternal bliss. 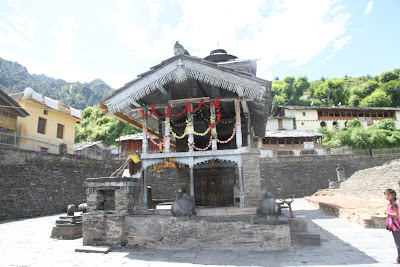 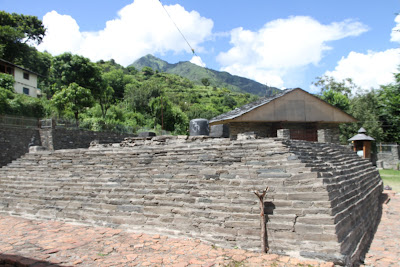 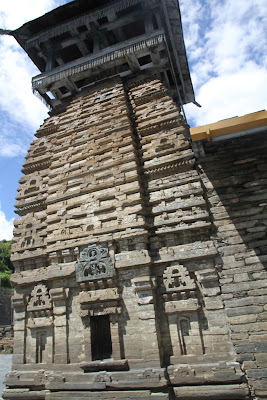 This temple is dedicated to Bhagwati and Lord Shiva. In the temple complex stands two life size stone statues of  Danav and Manav (dwarpals). There is a museum also which houses many shiva lingas which were excavated from this place. 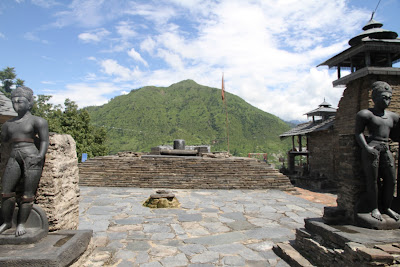 The guide said, it is believed that in the ancient times when someone had just died, the dead body when brought in front of this Shiv ling in above photo, came alive for some moments  before going to its peaceful death, following which the Atma would ultimately goto Lord's abode. 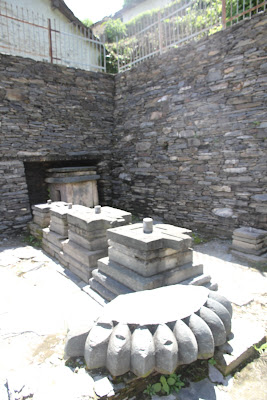 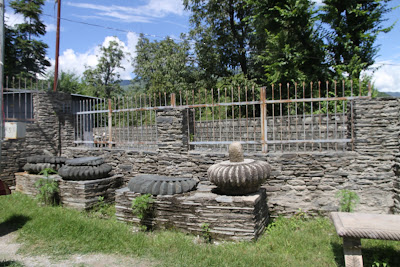 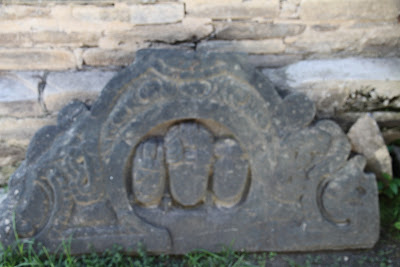 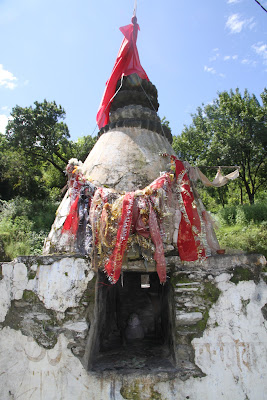 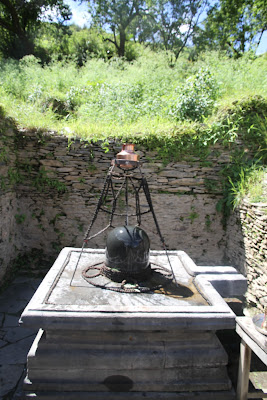 Out side the temple there are two Nandis at the both sides of the gate. There are four Shivlings with different colour / Shape near the gate of the temple. Dark green Shivling belongs to Dwapar Yug & red one belongs to Treta Yug. These are 4 Shivlings which belong to each yugas. 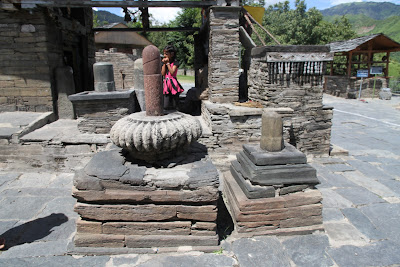 Inside the temple one can see the foot mark of baby Parvati  on a rock. Other than that, there are idols of Shiv, Parvati , Kartikey , Ganesha, Vishnu & Bajrangbali and many other gods.

We then stopped for a cup of tea near the cold Gangnani dhara. The hot Gangnani is on the way to Gangotri. Water was very clear and pure. We had taste of the sweet Yamuna water for the first time here. 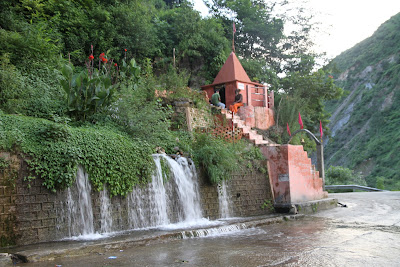 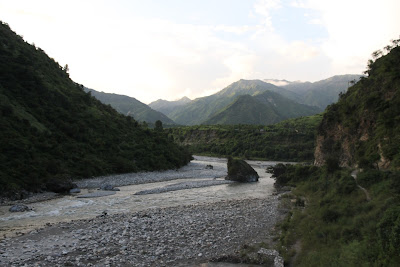 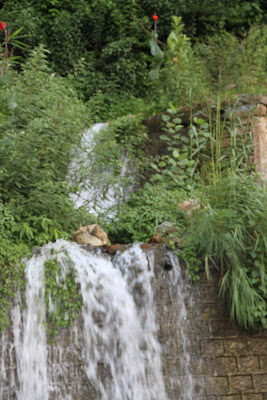 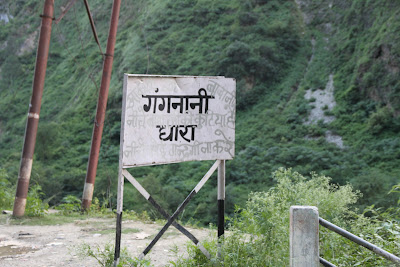 It was night by the time we reached the camp. If not the rains in recent past, the camp would have been very beautiful place to stay in. The path to camp was filled with patholes and was  very dangerous to drive after sunset. When we reached the camp, there were no lights and the place was completely deserted. As Yamunotri yatra had come to halt there were no piligrims staying at this place. Travel agents had not informed that we were arriving there. Then we met the hotel manager, who was a very friendly person. He arranged for very tasty food (which he himself cooked) and set up our rooms. It was a little hard to stay at this camp with two year old child. It was raining whole night and could hear the rushing water flow of Yamuna next to the camp. This place has a wealth of natural beauty, not the least of which are its spectacular sunrise, sunsets and a panoramic view of the Banderpoonch Mountains. However, because of the thick cloud cover, we could not get a view of the Banderpoonch mountains.

Barkot is a small town in Uttarkashi District in the state of Uttarakhand, India. Most travelers tend to use Barkot as a base camp for their trip up to Yamunotri.

Village Architecture: Barkot village is one place where the traditional architecture and way of life can still be seen. The houses here have been in existence for hundreds of years. They were first built at a time when the Gorkhas had attacked the region and people wanted to make themselves secure. The traditional house has just one door that, when closed, would make it impregnable. Even today, these three or four story structures are in use: top most by the family, the middle floor by domestic animals, goats, etc., and the ground floor by cattle. These houses are made of stone held together by a paste of urad dal and wood, and have withstood the ravages of time and earthquakes. The more well to do families had kotharas, small wooden structures used to store the family’s entire rations for the year.

Gangani kund
Next day morning before leaving back to Haridwar, we visited Gangani kund. It was a divine experience. It is situated next to Riverside camp where we stayed. According to local legend, cleaning of the Kund ensures rainfall. If monsoons are delayed in the region, the whole village gets together and cleans the Kund. After that they hold a havan and prepare prasad. It is believed that as soon as the prasad is distributed, it starts to rain.

There are few sanyasis and sanyasinis staying at the Jamadagni's ashram place.  Sanyasini showed us all the places with lot of interest and took us to Yamuna river for worshipping. They also provide free food for yatris who are traveling towards Yamunotri. There is a Durga idol which is worshipped and pracheen cow shed. The water in the rishi kund is crystal clear; the water in Jamadagni kund is non-different from Gaumukh Ganga jal; the stream coming out of the kund joins the Yamuna and Saraswathi within a short distance. This is another Triveni Sangam. We collected Yamuna water and did our prayers here itself and prayed that we could visit Yamunotri and Gangotri and go to their sources to worship the goddesses next time.

These are some more pictures of the kund from Yamunotri River side camp photo gallery. 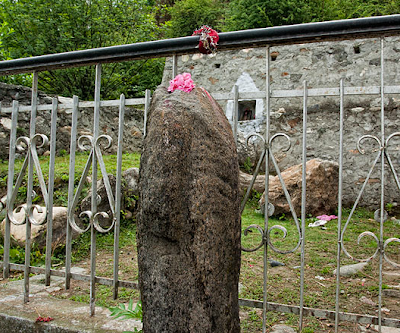 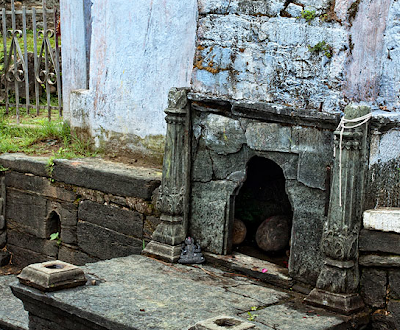 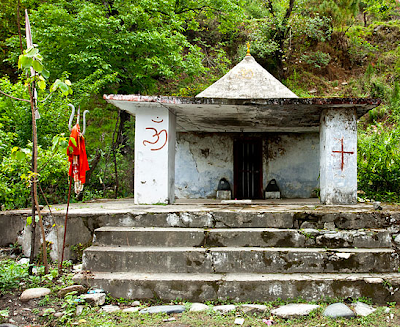 Barkot also has a Lakshmi Narayana temple and Astabuja maata temple next to it.


Unauthorized use and/or duplication of these photos and material without express and written permission from this blog’s author and/or owner is strictly prohibited. Excerpts and links may be used, provided that full and clear credit is given to tirtha-yatra.blogspot.com with appropriate and specific direction to the original content. This blog provides general travel information only. It is not intended to solicit business
Posted by Unknown at 2:37 PM 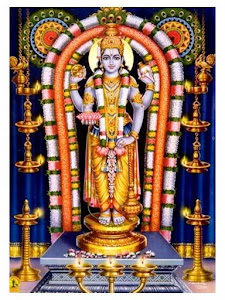